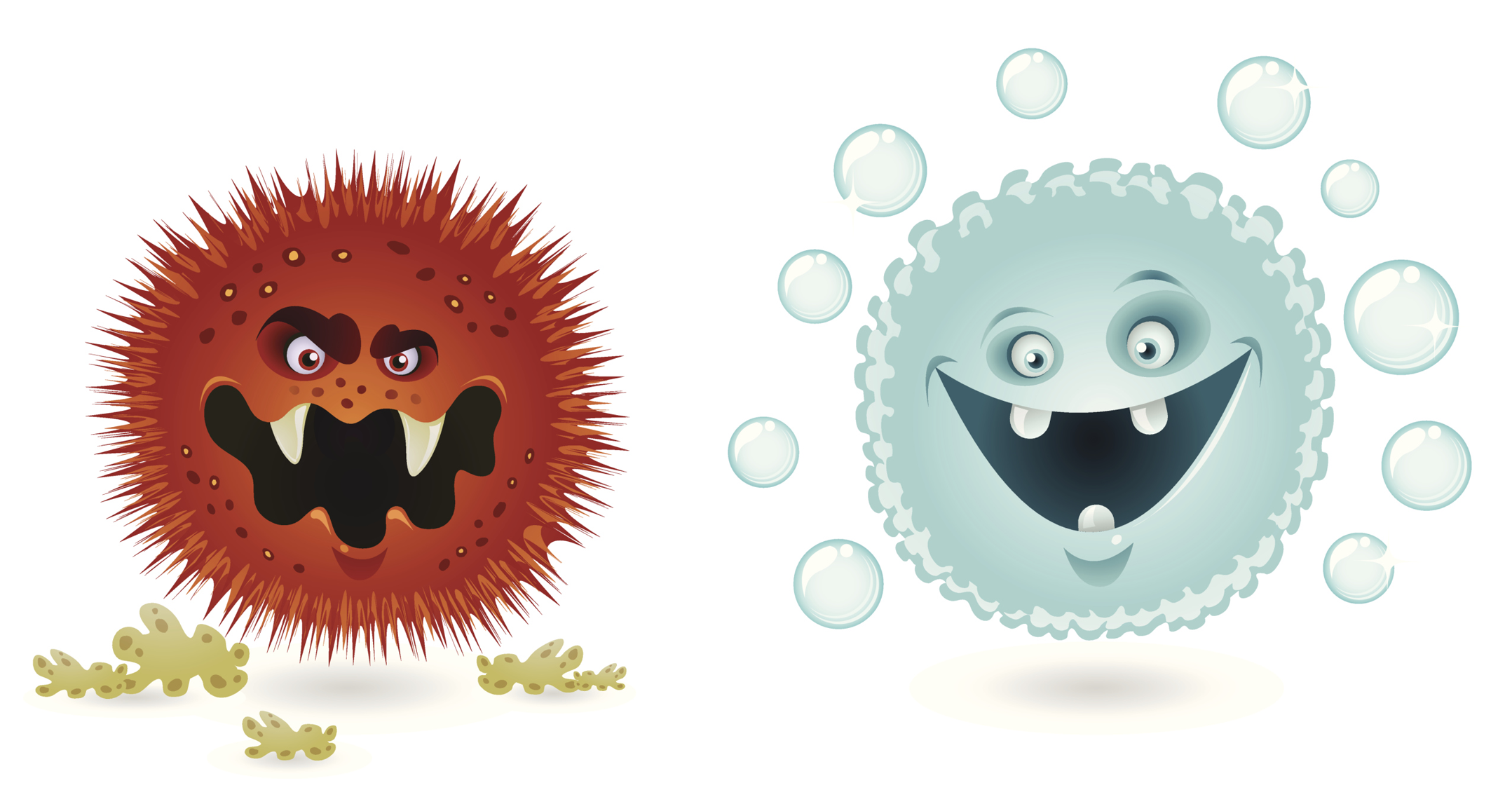 In this article, you will learn that although bacteria have a bad reputation, the majority of them are good and useful, both for humans and for aquatic ecosystems. Bacteria help animals to digest food, they help plants grow, and they recycle nutrients in the environment. They are also used in biotechnology to produce different food, energy and to clean water.

Do you know that if an alien would have kidnapped and studied us it may come to the conclusion that human beings are a „bag of microorganisms“ such as bacteria, viruses, fungi, and archaea! It is estimated that around half of our body is consisting of cells other than human. A microbiome of your body represents all the genes your microbiota contains. Good bacteria do not mean any harm, but actually, affect your body in a good way, and are pretty useful. In a human body, microorganisms are found on various sites, especially the skin, nose, mouth and the gut. The human gut is home to many microorganisms since it provides the ideal temperature, pH level, and nutrient supply for their growth and reproduction. In return, these microorganisms help us digest food, synthesize certain vitamins, absorb water, and defend us from harmful bacteria. 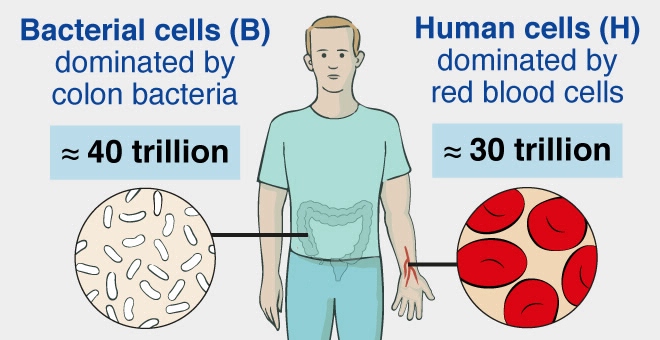 For almost any existing chemical element or compound, there are bacteria that use it, recycle it, and transform it. This movement of elements through living matter, atmosphere, oceans, and sediments is referred to as cycling. The carbon and nitrogen cycles are two of the most important global cycles, and bacteria play a key role every step of the way. Without bacteria, these cycles could not be performed and life would not exist! 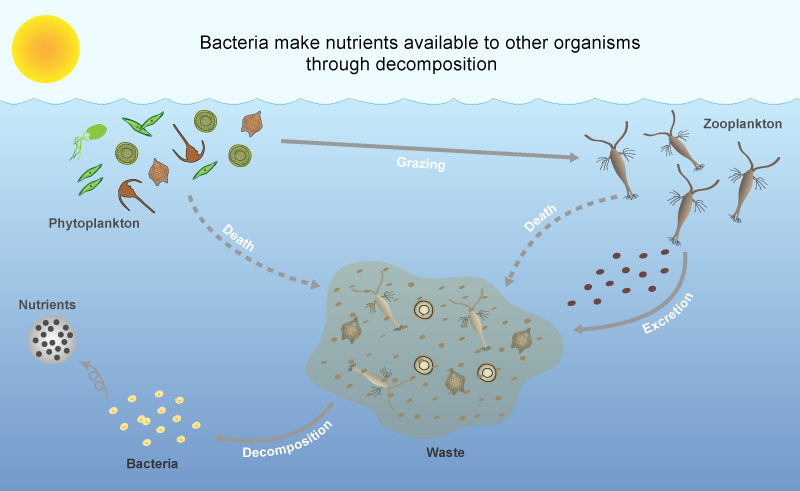 Some bacteria make oxygen available to other organisms through photosynthesis. These are called cyanobacteria. They contain chloroplasts (a specialized cell part that produces energy for an organism), take in sunlight, water, and carbon dioxide to photosynthesize and produce oxygen. 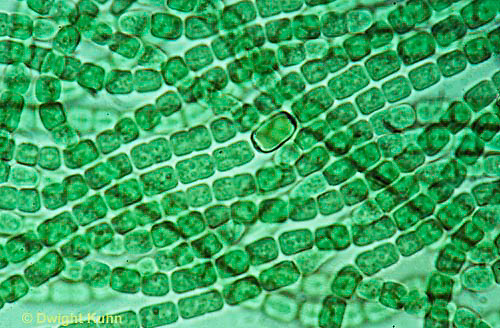 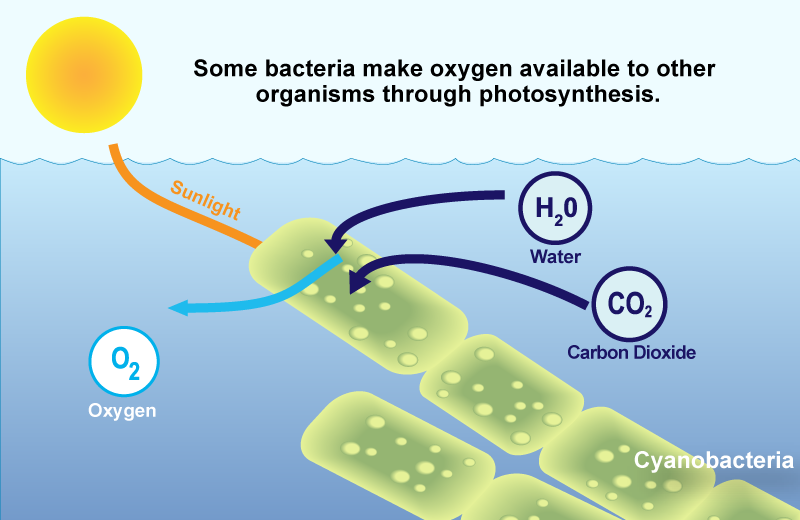 Every water body has the ability to clean itself. Rivers represent home to numerous good bacteria called decomposers which use dead organic matter present in water as their food source. In this process, organic matter is broken down and reduced to its original elements. Decomposition releases the chemicals that are critical for life, such are nitrogen and carbon. Actually, the most important thing recycled by decomposition is the element carbon, which is released into the atmosphere in the form of carbon dioxide. This liberated carbon dioxide will be used by other living things, such are plants, to build a new life. During decomposition, microorganisms use oxygen which is also present in water as dissolved oxygen (D.O.) for respiration. Bacteria convert organic waste into recycled materials which will be used by other living organisms, thus maintaining the river health. If the river constantly receives a high amount of organic waste its self-cleaning capacity may be weakened and eventually waste will accumulate in the river. In this situation, bacteria will consume more oxygen during the waste decomposition. Also, an increased amount of suspended particles will decrease the penetration of light. If these particles accumulate they may cover and wipe out vegetation that produces oxygen. This is extremely harmful to aquatic animals which require dissolved oxygen. Again, the river itself has the ability to increase the amount of dissolved oxygen in the water, since the top surface of the river is in constant contact with atmospheric air. That is why rivers with a large surface area and high velocities will have a higher concentration of dissolved oxygen and better cleaning capacity. For example, dam construction represents a huge problem, since it slows down the river leading to accumulation of waste and loss of aquatic life. It is important to remember, rivers are constantly trying to clean themselves. The problem may arise if the amount of dumped waste exceeds the self-cleaning capacity of the river. Besides rivers represent an important water source for hundreds of millions of people, they are the only habitat aquatic organisms have.

Bad bacteria in the river – bacteria as pollutants of rivers

The growth of human population and discharge of untreated waste in rivers led to pollution of waters with fecal bacteria. Since fecal waste may be the source of pathogenic bacteria, polluted drinking water is a major source of illness and death throughout the world, particularly in developing countries. These infections cause diarrhea, abdominal cramping, and potentially more serious symptoms, including fever, vomiting, and intestinal bleeding. 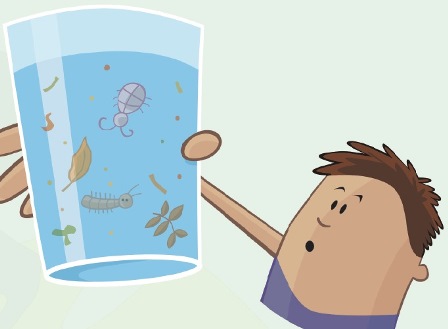 The presence of fecal bacteria in surface water may be assessed by monitoring the presence of coliform bacteria. A fecal coliform is a group of bacteria found in the intestines of warm-blooded animals. When large amounts of fecal coliform bacteria are present in water, it means that the water is being contaminated by some source of manure or other animal waste. It also indicates the possibility that disease-causing organisms could be present. The fecal coliform group also includes a type of bacteria called Escherichia coli (E. coli) which is the most reliable indicator of the fecal pollution presence and the possible presence of pathogenic bacteria.

Fecal waste may originate from domestic wastewaters from sewage and septic tanks, but also from livestock and agriculture. Anyone who has been on a farm knows that cattle and other livestock produce large amounts of manure. Rainwater washes this manure into our rivers, streams, and lakes, carrying with it fecal coliform bacteria from the manure. Manure also contains the nutrients nitrogen and phosphorus, so manure is doubly bad for our rivers and lakes. Pet waste can also be a problem in cities, which is one reason you are asked to collect it when you walk your dogs on city streets.

One way to help keep our water clean is to plant “buffers” of native trees and grasses between livestock fields and streams to help filter out the manure before it reaches the river or lake. It is also important to maintain rural septic systems, which can become cracked and leak over time. We must all work together as a community to reduce the number of harmful bacteria in our rivers, lakes, and streams.

The ability of the river to clean itself has served as an inspiration to establish bioremediation of sewage water. Sewage-eating microbes are included in the bioremediation for cleaning some parts or the river or polluted wastewater before it is discharged into the river. In this type of sewage treatment microbes simply use contaminants as their food source, degrade them with the release of carbon dioxide and water.

In this process, bacteria are cultured in bulk and applied to the flowing sewage. Then, the microbes are activated, they start to multiply, with or without oxygen, using organic matter present in sewage as a food source. Enzymes could also be added to activate the microbes. The microorganisms that are used already exist in nature. Bioremediation technology can also be used to clean oil spills. 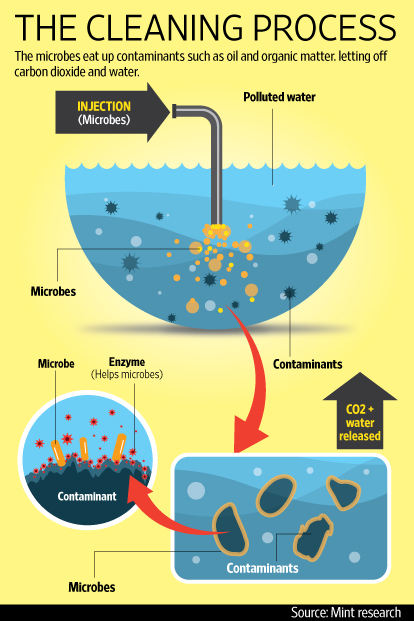 Microorganisms comprise about half of the biomass on our planet and perform crucial roles in all ecosystems. Just as our body would not be able to function and survive without beneficial microorganisms, also the rivers would not be able to remove organic pollution and maintain their health without microorganisms. The self-cleaning capacity of the river is enhanced by the work of decomposer microorganisms. They have an essential role in the natural recycling of living materials and play a key role in the biogeochemical cycling of elements like carbon, nitrogen, and sulfur. Since all naturally produced substances are biodegradable they can be broken down by decomposers, such as bacteria or fungi. In order for the river to maintain the correct mix of microorganisms and to help its self-cleaning capacity, it is necessary to reduce the pollution pressure which comes from untreated wastewater and solid waste. That’s all that we need to do as humans, and the river itself will manage to maintain its health. Let’s help our rivers!

A battle within: how the immune system helps ‘good’ bacteria fight off ‘bad’ microbes in the gut

Microbiome – comprises all of the genetic material within a microbiota (the entire collection of microorganisms in a specific niche, such as the human gut.

Bioremediation – a process that uses living organisms, mostly microorganisms and plants, to degrade and reduce or detoxify waste products and pollutants.

In this article, you will learn that although bacteria have a bad reputation, the majority of them are good and useful, both for humans and for aquatic ecosystems. Bacteria help animals to digest food, they help plants grow, and they recycle nutrients in the environment. They are also used in biotechnology to produce different food, energy and to clean water.

Similar Posts by The Author: 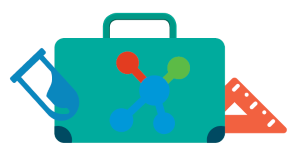 Jovana Kostić-Vuković, Serbian team member
Jovana Kostić-Vuković is a research assistant at the Institute for Multidisciplinary Research, University of Belgrade, Serbia. Her research focuses on examining the impact of different sources of pollution on the quality of freshwater ecosystems by monitoring microbiological indicators and ecogenotoxicological and histopathological biomarkers in autochthonous fish. Since 2014 she is involved in practical training on the courses Microbiology, Microbiological practicum and Methods in microbiology, at the Chair of Microbiology, Faculty of Biology, University of Belgrade. She has published 13 scientific papers and participated with more than 30 announcements at scientific meetings in the country and abroad.

Jovana Kostić-Vuković is a research assistant at the Institute for Multidisciplinary Research, University of Belgrade, Serbia. Her research focuses on examining the impact of different sources of pollution on the quality of freshwater ecosystems by monitoring microbiological indicators and ecogenotoxicological and histopathological biomarkers in autochthonous fish. Since 2014 she is involved in practical training on the courses Microbiology, Microbiological practicum and Methods in microbiology, at the Chair of Microbiology, Faculty of Biology, University of Belgrade. She has published 13 scientific papers and participated with more than 30 announcements at scientific meetings in the country and abroad.

ROLES OF AQUATIC MICROORGANISMS IN RECYCLING OF MATTER

GOOD AND BAD GUYS AMONG BACTERIA